The New Adventures of Old Christine: The Complete Fourth Season 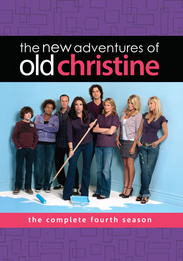 Divorced working mother Christine Campbell (EmmyÂ® winner Julia Louis-Dreyfus - Seinfeld) attempts to juggle the daily stresses of motherhood and business â which doesn't mean she isn't prone to taking NyQuil to get to sleep or leaving voicemail messages to herself in the middle of the night. She owns a women's 30-minute workout gym with her best friend, Barb (Wanda Sykes), to whom she has just proposed marriage in order to keep Barb from being deported back to the Bahamas. The fourth season of this hilarious comedy finds Christine still enduring encounters with the "meanie" moms at her son's posh private school and dealing as her charming ex-husband, Richard, asks for her ring back in order to propose to his girlfriend â also named Christine â the "new" Christine. This, by default, makes Christine "old" and still single. But could there be romance in the air? Tim DeKay (Bizarro Jerry on Seinfeld) guest stars. The series is executive produced and created by Kari Lizer (Will & Grace).