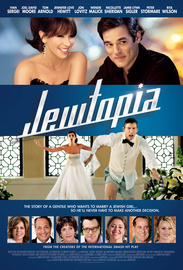 Inspired from the international smash hit play seen by over a million people, JEWTOPIA stars Ivan Sergei, Joel David Moore, Jennifer Love Hewitt, Jon Lovitz, Rita Wilson, Tom Arnold, Peter Stormare, Camryn Manheim, Jamie-Lynn Sigler, Wendie Malick, Nicollette Sheridan, Phil Rosenthal, Christine Lakin, Hayes MacArthur and Lin Shaye. The story is about Christian O'Connell (Sergei) and Adam Lipschitz (Moore) -- two childhood friends who reunite as adults to help each other land the women of their dreams. Chris wants to marry Allison (Hewitt), a Jewish girl, so that he'll never have to make another decision for as long as he lives. Adam is on the verge of getting married to Hannah (Sigler), a woman he is not content with. When Chris enlists Adam's help in pretending to be Jewish so that Allison will date him, cultures collide and chaos ensues!