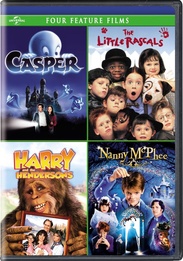 Casper Hilarious antics ensue when "Ghost therapist" Dr. James Harvey (Bill Pullman) and his daughter Kat (Christina Ricci) attempt to exorcise Casper and his trouble-making uncles from Whipstaff Manor. The Little Rascals Recapturing the sense of innocent fun and pandemonium that has made the original Little Rascals a family classic, their new adventures teach them the value of true friendship...and even an appreciation of girls! Harry and the Hendersons A car accident introduces the Hendersons to the real-life Bigfoot, who quickly becomes a true friend to the family, but they're soon in a race against the clock to return "Harry" to his natural environment before the authorities capture him. Nanny McPhee In this charming tale, Emma Thompson portrays a mysterious woman with special powers who attempts to tame the seven very naughty children of the recently widowed Mr. Brown (Colin Firth).

Casper
Harry And The Hendersons
The Little Rascals
Nanny McPhee