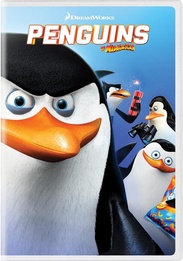 They're cute...they're cuddly...they're back! From the creators of Madagascar comes the hilarious new movie that proves global espionage is for the birds! In DreamWorks' Penguins of Madagascar, your favourite super-spiesSkipper, Kowalski, Rico and Privatejoin forces with the elite North Wind team to save the world. It's a side-splitting, globe-trotting adventure the whole family will love!

Rated PG for mild action and some rude humor.