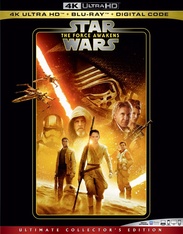 Thirty years following the battle of Endor, the Resistance is still hard at work rebuilding the galaxy from the ashes of the Empire. Remnants of the Empire, namely the First Order, threaten to unbalance the fragile peace in the galaxy. Echoes of the past overshadow the events in the present as two young people begin a journey that will take them to the far reaches of the galaxy looking for answers to the ongoing conflict between the light and Dark Side of the Force.