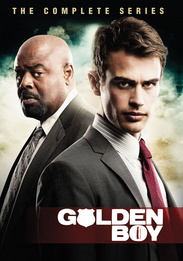 In this gritty character-driven drama from Greg Berlanti (Arrow, Everwood) and Emmy winner Nicholas Wootton (Chuck, NYPD Blue), a young, ambitious police officer (Theo James -- Underworld: Awakening) rises quickly within the New York Police Department perhaps through questionable methods after becoming a celebrated hero in the line of duty. As the series begins, Walter William Clark Jr. (James) barters becoming a detective with one of the premier homicide task forces. A product of the streets, Clark will do anything to keep from going back, just as he'll take any risk to crack a case even if it's against the law. His off-the-cuff methods make his partner, Detective Owen (Chi McBride -- Human Target, Boston Public), nervous, and they don't sit well with Detective Arroyo (Kevin Alejandro -- True Blood), whose bald ambition is hard to ignore. There are good guys and bad guys but what does it take to be a golden boy?