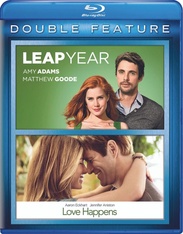 Leap Year: When Annas (Amy Adams) four-year anniversary to her boyfriend passes without an engagement ring, she decides to take matters into her own hands. Inspired by an Irish tradition that allows women to propose to men on Leap Day, Anna follows Jeremy (Adam Scott) to Dublin to propose to him. But after landing on the wrong side of Ireland, she must enlist the help of the handsome and carefree local Declan (Matthew Goode) to get her across the country. Along the way, they discover that the road to love can take you to very unexpected places. Love Happens: Jennifer Aniston and Aaron Eckhart star in the romantic drama Love Happens. When self-help author Dr. Burke Ryan (Eckhart) arrives in Seattle to teach a sold-out seminar, he unexpectedly meets florist Eloise Chandler (Aniston), the one person who might be able to help him help himself. But will two people who may have met the right person at exactly the wrong time be able to give love a chance? If they can, theyll find that sometimes, when you least expect itlove happens.