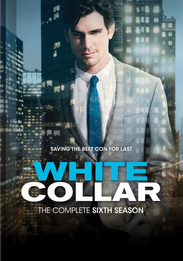 Experience the thrills, one last time, with Season 6 of televisionâs slickest, most seductive crime drama â White Collar. The tension has never been greater as Neal Caffrey (Matt Bomer) re-teams with FBI agent Peter Burke (Tim DeKay) in their most ambitious sting operation yet â infiltrating a sophisticated gang of deadly thieves. With Elizabeth Burke (Tiffani Thiessen) pregnant, Neal desperate for his freedom, and amidst pressure from Mozzie (Willie Garson) for Neal to cut ties with the FBI, the scheme unfolds, culminating in the seriesâ most shocking plot twist of all. Also, only on DVD, join the cast and crew as they discuss their favorite moments from the showâs six seasons in the moving retrospective White Collar: Case Closed.