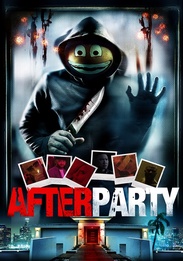 Young Hollywood âEliteâ, aka The Social Media Influencers, think tonightâs afterparty is the usual Hollywood Hills get together at another private mansion after the club. Little do they know that not everyone is going to make it out alive. What starts off as an intimate get together spirals into a night of survival. One by oneâ¦ vegan, model, slut, club promoter, drug dealer, Latina, reality star, wannabe rapper, v-loggerâ¦ all have to fend off a killer hunting them down. These people donât know why theyâre being targeted by the killer wearing a âsmily Faceâ emoji mask, but come to learn about the dark, secret underworld of the REAL HOLLYWOOD ELITE. The ones that survive the night, must continue the constant cycle of cleansing, and keeping the amount of celebrities in Hollywood at a minimum, or die.