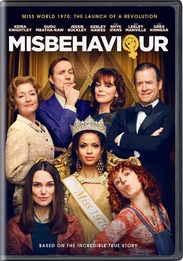 Misbehaviour tells the sensational true story of the Women's Liberation Movement's disruption of the 1970 Miss World pageant, an event watched by more than 100 million viewers, and which made headlines around the world. Not only that, when order was restored, the first woman of colour was crowned Miss World. In a matter of hours, a global audience had witnessed the patriarchy driven from the stage and the Western ideal of beauty turned on its head.