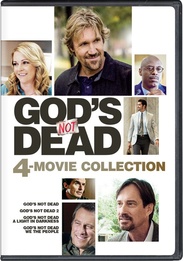 God's Not Dead 4-Movie Collection features four inspiring films anchored by David A.R. White with performances from Kevin Sorbo, Melissa Joan Hart, John Corbett and Isaiah Washington. In God's Not Dead, the first film of the celebrated franchise, a Christian student's faith is challenged by an atheist professor. God's Not Dead 2 follows a high school teacher who faces public scrutiny after answering a student's innocuous question about Jesus. God's Not Dead: A Light in Darkness follows a story of a church being forced off a college campus, which brings the community together in an unexpected triumph. In the newest release, God's Not Dead: We the People, a pastor defends a group of Christian homeschooling families to fight for religious freedom in the United States. These four faith-inspired films will entertain families of all ages.