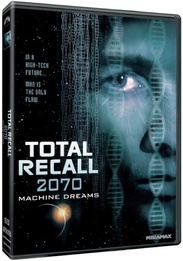 Total Recall 2070 is a stunning futuristic thriller about a world so high-tech, man is the only flaw. In the year 2070, the planet Earth is ruled by a single government entity and a conglomeration of corporations that hold absolute power. The crime rate is virtually nonexistent and the Citizen's Protection Bureau defends the innocent from unchecked sociotechnological forces. But when the Bureau partner of Agent David Hume is dramatically gunned down, Hume's determination to uncover the dangerous truth behind this shocking crime leads him on a pulse-pounding race through the galaxy.