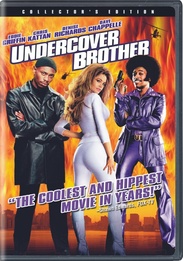 Starring Eddie Griffin, Chris Kattan, Denise Richard and Dave Chapelle, Undercover Brother is a wildly over-the-top comedy spoof like no other! He's badder than Bond. He's cooler than any international man of secrets. He's Undercover Brother, a globe-trotting disco-dude of intrigue with more cool spy gadgets up his sleeve than you can shake a rocket-launching cigar at. Now, this Kung-Fu-fighting, Caddy-convertible-driving super-secret agent is swinging into action against a deliciously twisted plot to brainwash all of humanity. Rocking to a solid-gold '70s soundtrack, Undercover Brother is the funk-fueled comedy free-for-all!