Call Of The Wild 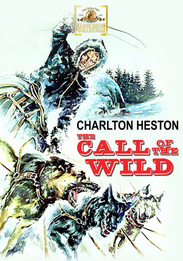 This beautifully made classic based on Jack London's story features Charlton Heston as John Thornton, a Klondike gold prospector in 1897 in the Yukon region of Canada during the Klondike Gold Rush. Thornton is trying to eke out a living in the harsh conditions of the Yukon along with his German Shephard companion, 'Buck'. Thornton and Buck endure many hazards and extreme conditions together, but Buck has his own story to tell. During the time when demand for good sled dogs was high, Buck was stolen from a California ranch and sold to work the Skagway to Dawson City route pulling mail and supplies. While trying to adapt to his harsh new life, Thornton finds Buck and befriends him, and the two (man and dog) form a lasting bond together. Tragedy strikes when Thornton is killed, but Buck avenges his master's death. The ending is emotional and heart wrenching. This is truly one of Heston's best films ever! Full of hardship, love and devotion, this is absolutely a timeless family classic! It will leave you in tears!. NTSC - Color - (4:3)