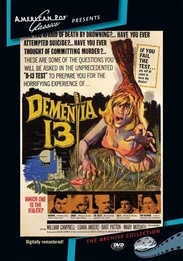 John Haloran has a heart attack. His wife Louise won't get any of the inheritance from his mother's estate if he is dead, so she forges a letter from him to convince his family he's in NY on business to ensure a cut of the inheritance. His sister had also drowned and the family enacts a morbid ritual in remembrance. Following the abrupt death of her husband from a heart attack, the scheming Louise Haloran (Luanda Anders) travels to her in-laws estate in Ireland, only to find herself trapped in a creepy, decrepit castle with her ex-husband's demented family. Upon arrival, she is introduced to a pair of maladjusted brothers (William Campbell, Bart Patton) and a distraught mother-in-law (Eithne Dunn), still grieving for the daughter she lost in a drowning accident many years earlier. When a mysterious axe-wielding psychopath enters the fray, leaving blood-spattered corpses in his wake, the family's doctor (Patrick Magee) takes it upon himself to try to get to the bottom of things--before it's too late! The making of Dementia 13, meanwhile, is a tale unto itself. An aspiring film-maker fresh out of UCLA, Coppola found work under the tutelage of B-movie legend Roger Corman, doing sound, editing and various other tasks. After finishing a film called The Young Racers under budget, Corman opted to use the leftover funds to finance a low-budget thriller to cash in on the success of Alfred Hitchcock's Psycho. Coppola quickly delivered a script to Corman's liking, promising plenty of nudity and gore. Corman gave him the green light. Despite the meager budget, Coppola made the most of his resources, re-purposing both sets and actors from The Young Racers, while employing the sort of creative lighting, camera angles, and storytelling that reveals an early glimpse at the great filmmaking that would follow with such titles as Apocalypse Now and The Godfather trilogy.