Don King: Only In America 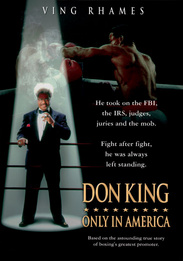 From running members to "The Rumble In The Jungle." From Muhammad Ali to Joe Frazier, Larry Holmes and Mike Tyson, promoter Don King made millions, and made millionaires, making himself the biggest name in boxing since boxing began. But how he got there - making and breaking the law and anyone who got in his way - is the kind of story that could happen only in America. Don King is a hustler with dreams. A numbers runner in Cleveland, guilty of manslaughter and killing in self-defense, he soon builds himself a music and entertainment empire making a few friends, and quite a few enemies along the way. When an introduction to Muhammad Ali in 1971 turns his life around, he sets himself up as a boxing promoter with the single aim of making it to the big time. In pursuit of his great American dream, he wouldn't always fight clean, he wouldn't always fight fair, but Don King would always fight to win.