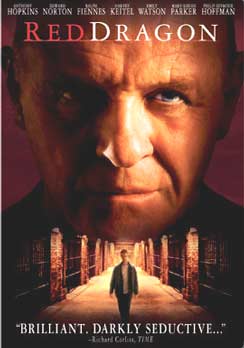 Back on October 14, 2010, I claimed that a rumored sequel to Top Gun was the "worst idea ever." I may have to amend that statement after today's news.

Normally, we don't report much about the ins and outs in TV land. Sure, we enjoy TV as much as the next person, but we know what our bread and butter is and we tend to stick with what we're good at. But sometimes, we just have to speak out and let our feelings be known.

This is one of those times.

TV Line is reporting that NBC has greenlit a series called 'Hannibal' that, you guessed it, will center around the psychiatrist turned cannibalistic serial killer. Oh, but it gets better. The show will apparently sever all ties to the film franchise and present a contemporary take on the character and his dealings with FBI agent Will Graham.

You may recall that Graham and Lecter parry back and forth in the first Lecter novel/movie Red Dragon and while the book was excellent, the film failed to capture the lightning in the bottle that Anthony Hopkins caught in his first portrayal of the character in The Silence of the Lambs.

But even somehow if a new actor were able to follow in Hopkins' footsteps and do a decent job of bring Lecter to life, who wants to see that? With so many criminal procedures on TV today, the concept of using profiles to nab bad guys is hardly still in its renaissance. In fact, Criminal Minds is basically the TV version of The Silence of the Lambs already.

No, NBC is grasping at straws as they struggle to stay relevant and this is just another example of a show that is set up to fail. Now, if they were to somehow cast it brilliantly and then have full license to manipulate the established mythology then maybe it could work, but sadly I think it's just time to put this cannibal to bed.

That got me thinking though. Could I come up with an even worse list of five movie characters that would totally suck on TV. I like challenges, so I came up with the following list. Let me know how I did and tell me who you think would be worse on TV.