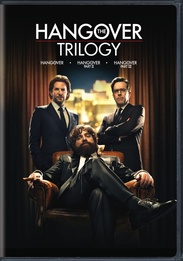 Todd Phillips invites you to embark on the ultimate odyssey of bad judgement, hilarious havoc and madcap mayhem with The Hangover Trilogy. Join "The Wolfpack," a.k.a. Phil (Bradley Cooper), Stu (Ed Helms), Alan (Zach Galifianakis), and Doug (Justin Bartha), as they endure a plethora of outrageous indignities  including a disaster-magnet Leslie Chow (Ken Jeong)  in all three movies from the explosively funny Hangover franchise. Complete with an all new documentary covering all three films.