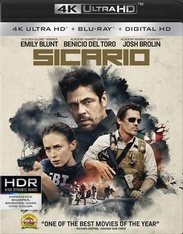 From the director of Prisoners comes this taut, critically acclaimed thriller filled with pulse-pounding suspense. After an idealistic FBI agent (Emily Blunt) is recruited by a government task-force official (Josh Brolin) to pursue a drug lord, she begins a perilous mission that forces her to question everything she believes-and pits her against a shadowy consultant (Oscar® winner Benicio Del Toro) with a dangerous agenda.