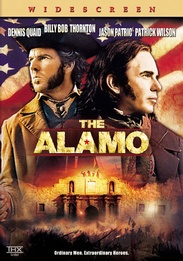 In the spring of 1836 nearly 200 Texans held the fort for thirteen days under siege by General Antonio Lopez de Santa Anna, ruler of Mexico and commander of its forces. Led by three men - Colonel William Travis, James Bowie and Davy Crockett - the Texans and their deeds at the Alamo would pass into history as General Sam Houston's rallying cry for Texas independence.

As well, their actions would become legend for their symbolic significance.