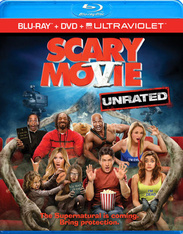 In SCARY MOVIE 5, happily-married couple Dan and Jody begin to notice some bizarre activity once they bring their newborn baby Aiden home from the hospital. But when the chaos expands into Jodyâs job as a ballet dancer and Danâs career as an Ape researcher, they realize theyâre family is being stalked by a nefarious demon. Together, with the advice of certified experts and the aid of numerous cameras, they must figure out how to get rid of it before itâs too late. SCARY MOVIE 5 is directed by Malcolm Lee who teamed up and worked side by side with legendary comedy director David Zucker (AIRPLANE, THE NAKED GUN franchises). Zucker wrote and directed SCARY MOVIE 3 and 4 and also co-wrote and produced SCARY MOVIE 5.