It was touted as Ali vs. Frazier as both American Hustle and Gravity came into the Oscars with 10 nominations each, but the result was more vintage Tyson vs. some unfortunate soul who would wake up a week later with at least a nice paycheck to soothe his pain and suffering. Last year's awards darling David O. Russell and his film American Hustle was completely shut out while Gravity took home a show-leading seven statuettes.

While it was an impressive showing for Gravity, their awards were mostly in the the technical categories where they swept through the competition. At the top, 12 Years a Slave ruled as it took home Best Supporting Actress for Lupita Nyong'o, Best Adapted Screenplay for John Ridley and, of course, Best Picture.

12 Years a Slave director Steve McQueen might not have won for Best Director, but that didn't prevent him from giving his speech as part of the Best Picture win. His celebratory "jump for joy" afterwards pretty much summed up the night that was safe and a departure from last year's controversial host Seth MacFarlane. This year's host Ellen DeGeneres did an admirable job and got plenty of rave reviews on the social networks, but to me it just felt too safe.

The real winners of the night were Samsung and Twitter thanks to all of the selfies that DeGeneres posted from her phone to the popular social network. Oh, and we can't forget that local pizza joint Big Mama's and Papa's Pizzeria. I'm not sure how their pizza tastes, but if you click the link above, you can tell they are great at capitalizing on the buzz. 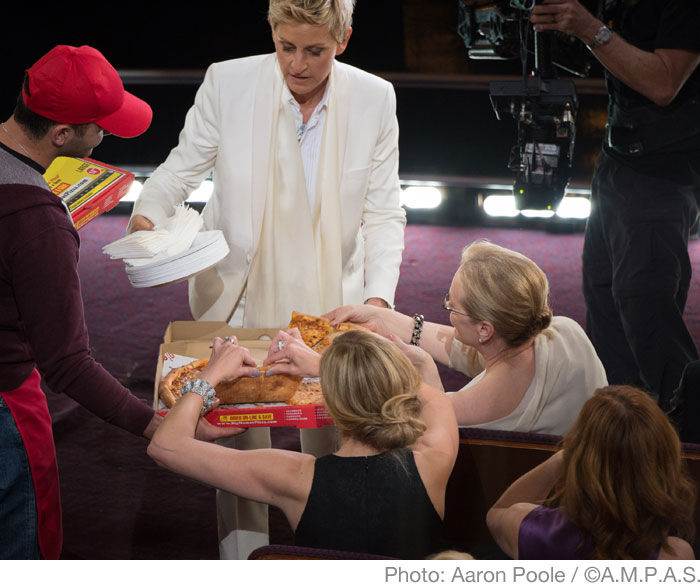 I love that delivery guy. He spotted Jennifer Lawrence and made a bee-line for the popular young actress and made sure she got a slice. And in a move that only cements her awesomeness in my eyes, she wolfed down the pizza with a zeal usually reserved for hardcore pizza fanatics and not Oscar-winning actresses.

In the moment that crystallized the ceremony for me, Matthew McConaughey channeled his Dazed and Confused character to end his acceptance speech for Best Actor, "Alright. Alright. Alright."

Yes, Matthew the night was "alright."

If you missed the entire telecast, here's everything distilled down to less than 2 minutes, compiled by the folks at Digg.

Here are all the winners from Sunday night's 86th Annual Academy Awards.